KNOOP HARDNESS
The Knoop hardness test is an indentation hardness test in which a rhombic-based diamond pyramid, having an included longitudinal edge angle of 172.5 degree and an included transverse edge angle of 130 degree, is forced into the surface of a test piece. The length of the long diagonal of the indentation left in the surface after removal of the test force. The Knoop hardness HK is calculated by software. 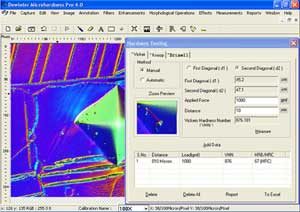