Fooudryroch is a beautiful software, which effectively caters to the entire need of casting analysis

* Artifacts less than 10 Micron are not excluded in analysis.
* Nodules are separated from Non-Nodules on predefined Sphroidicity.
* The Nodules form ( Designated by Roman no. I to VI ) & Size ( Designated Arabic no. 1 to 8 ) is reported.
* The Flakes occuring in Cast Iron in the form I, reported on the basis of type of distribution ( designated by capital letter Ato E on the basis of orientation ) and size ( designated by Arabic no. 1to 8 ).
* The percentage of PEAR LITE is calculated by excluding the Graphite area.
* The Matrix of PEARLITE, FERRITE, GRAPHITE & CARBIDE are reported in etched sample.
* Rport is generated with specific International standard choosen by user.
* F% is reported in JIS method. 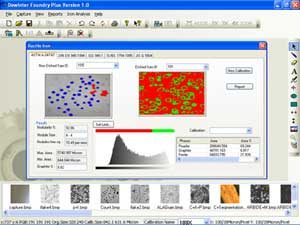